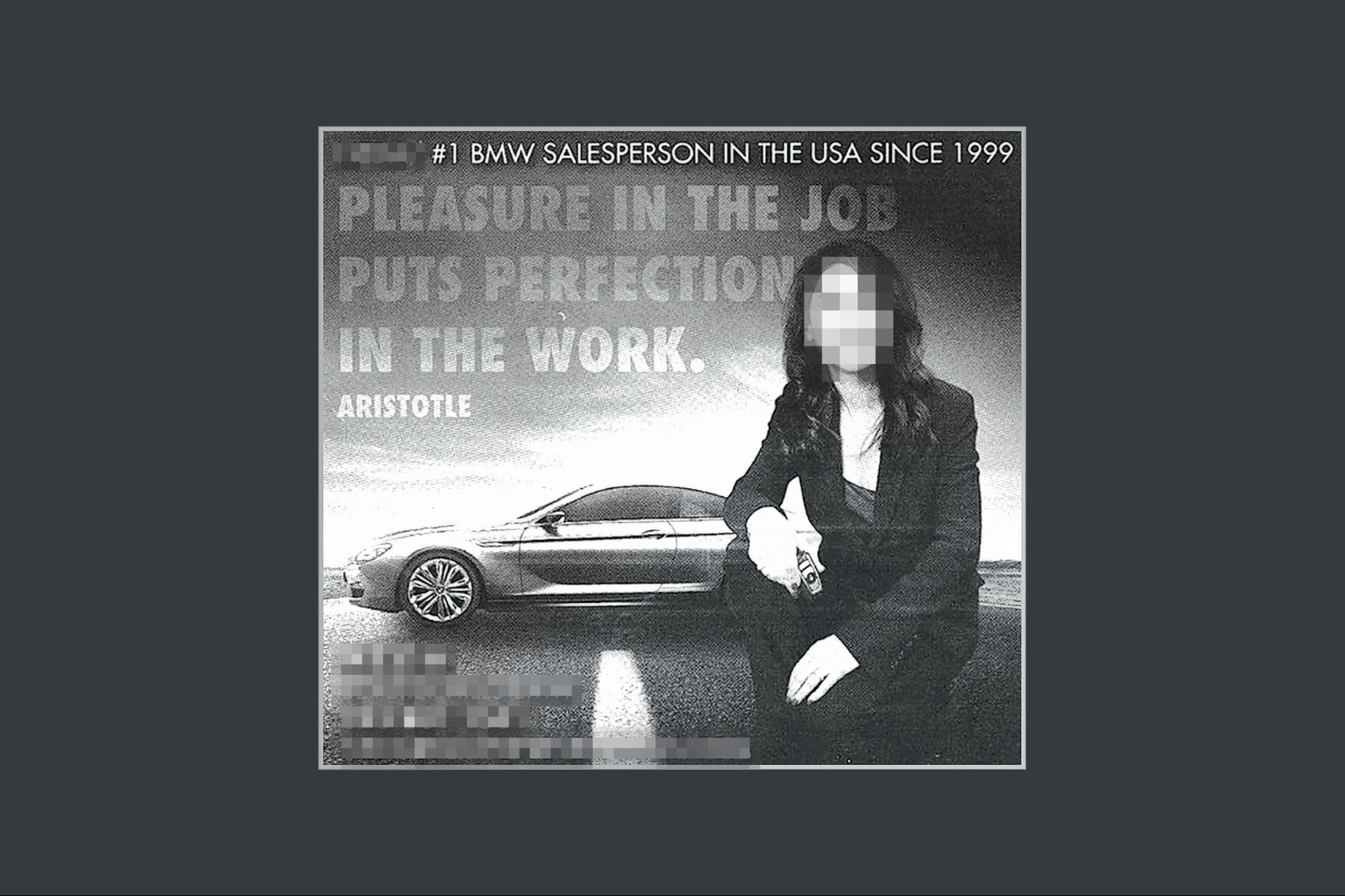 The term “direct marketing” is often synonymous with “mail order.” It comes with set-in-cement success principles dating to the turn of the century, which might make you think: Why would I ever think of applying that to my local brick-and-mortar retail business, service business, or professional practice? 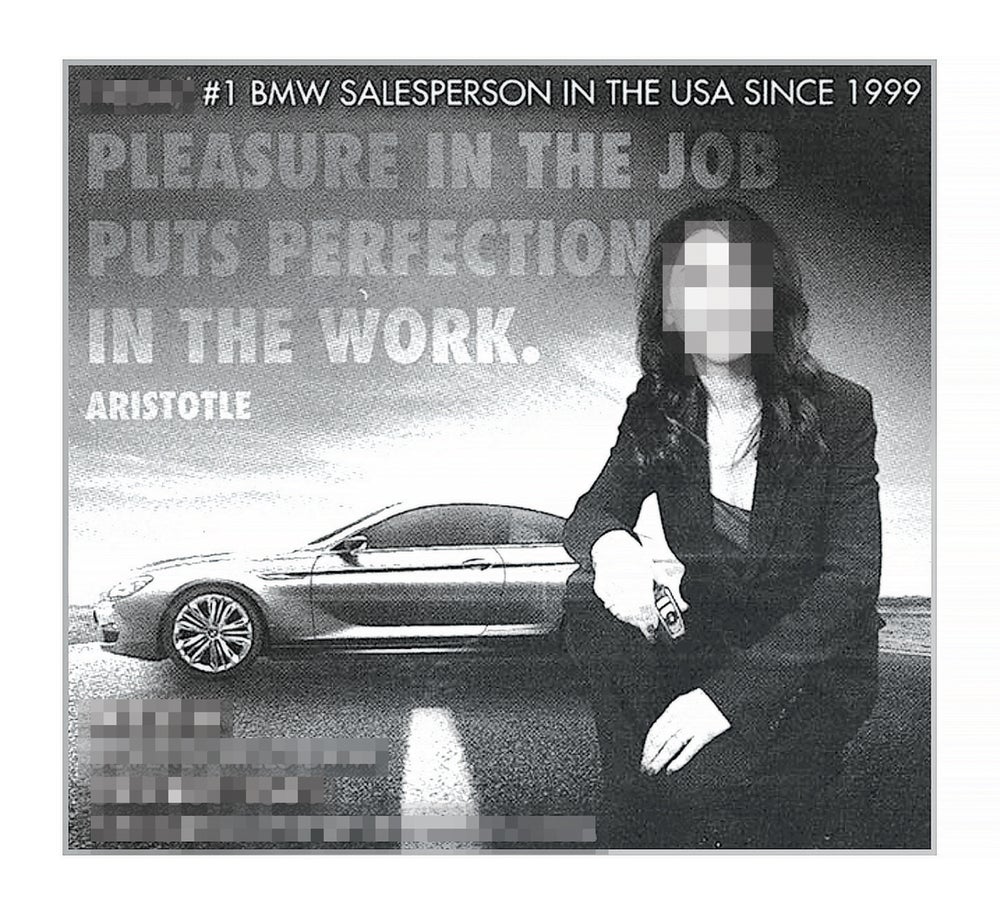 This is an actual ad that ran years ago in Variety. Entrepreneur has blurred identifying details that appeared in the ad, including her name, face, business name, and email address.

Image Credit: Variety via The Best of No B.S. by Dan S. Kennedy

To show you how small details make the difference, I’m taking one single advertisement…and then picking it apart. This is a real ad, with just a few things blurred to protect the almost-innocent. And when you see why this one ad failed, you’ll see why most direct marketing misses the mark.

Let’s call this advertiser Tina. Tina ran this ad in Variety, a trade magazine for the entertainment industry, and she is the only advertiser in her category, which means she’s following my favorite strategy about placement: Show up alone. She’s reaching customers who want to deal with super-successful people, so she was smart to note at the top of the ad that she is “the #1 BMW salesperson since 1999.”

Visually, the ad is eye-catching and artful. The car is sleek and shiny. Tina looks good. The ID in the lower left corner is easy to read. The whole thing speaks of class and luxury.

Now, here’s what went wrong: Just about everything else.

A lot of real estate agents, financial advisors, cosmetic surgeons, and other professionals pour money into these kinds of brand ads — which I strongly discourage. That’s because they do not specifically invite people to do anything. This ad is like meeting Tina at a cocktail party, being introduced, having her tell you she is the number-one BMW salesperson, then abruptly spinning on her heel and walking away or, if you ask her a question, standing there mute.

As a result, only one type of customer will respond to this ad: It’s someone who needs a car now. The ad does nothing and offers nothing for the many more whom she has intrigued, who are just beginning to think about a new car, or who plan to start shopping when their next residual check comes in. They are left loose, in the hope that they’ll remember Tina months later when they are ready.

Related: How to Unleash Your Creativity and Transform Your Marketing Strategy

She has paid for many eyeballs to look at this ad, but she has no idea how many or who they are, and can do nothing to build trust and interest with them between now and the time they actually buy a car. To her credit, she’s created some ways to tell if this ad is effective: She’s offered only two ways to respond, both direct, and she can obviously ask prospects where they heard of her. Still, there’s a lot of room for leakage.Don’t waste eyeballs you pay for.

Three ways to fix this ad

Here’s the first fix, which requires minimal fuss: The ad can simply be shrunk vertically a tiny bit, enough to fit a line or two of direct-response copy, black or even gray on white at its bottom. It can be in a discreet and elegant typeface. And it could say:

To see Tina and a movie stuntman test drive this BMW, or to get a free report on how to own the perfect luxury automobile, complete the quick request form at DrivingWithTina.com.

By adding these two offers, we create what’s called Secondary Reason for Response. For someone who’s not ready to buy a car today, we give them a reason to respond now anyway. Meanwhile, Tina still gets the buy-now customers who call her or email her, but she also now gets names, email addresses, and in some cases full addresses (for people who want that free report mailed to them) of the not-ready-now potential buyers that she can continue communicating with directly.

For a more aggressive solution, Tina could add a promise or benefit headline to the top, plus maybe a small testimonial from a famous Hollywood figure in the dead lower right corner, and also add the same lead-generation offers I added previously.

Related: What is Good Content and Why Does it Matter for Your Marketing?

The most aggressive option would be to replace the entire ad with a black on white,

article-style mini advertorial, matching the content typeface of the magazine. Its headline might be “The #1 BMW Salesperson in the U.S. Since 1999 Announces Openings for 7 Hollywood/Beverly Hills Area Clients in Her Exclusive Private Client Group.” The article would end with a direct call to action to call or email Tina for private client details, a test drive, and a gift of fine wine with the test drive, and it would still have the Secondary Reason for Response Offers as well.

I doubt I’d ever convince Tina to buy this third option. I’d be seen as an uncouth beast. But maybe I can persuade you?

How to buy more brand-building power

Let’s assume that one of the above three methods results in the sale of, on average, one more car per month than Tina presently sells via this ad. Let’s assume that equates to a few thousand dollars of commission income.

What might Tina do with the money? She could go shopping on Rodeo Drive, but I’ll bet her closet is already full. So, she could use it to buy a bigger ad. And if that upped sales yet again, she could go up to a full page, cut in half vertically or horizontally, with a big traditional ad in half its space and a constantly changing advertorial like I suggested in the other half. With this much bigger presence, she’d be impossible not to notice and remember, and her brand would dominate faster, with more people.

Related: The Death of Traditional Advertising and the Rise of Originality

That’s how direct response can build a brand bigger, stronger, and faster.

Consider the cost of Tina’s ad: People see it and then, when they are finally ready to buy a car, they don’t remember Tina and buy with someone else. That’s dead weight on Tina’s advertising budget. It grows heavier every time the ad runs. Soon it brings Tina’s ad budget to its knees.

This article was excerpted from Dan S. Kennedy’s forthcoming book, The Best of No B.S. Get your copy at entrepreneur.com/bookstore.

You Don’t Have to Know Design to be a Designer with This Tool
Sales Training – 8 Tips On How To Set Expectations During The Sales Process
A Minimalist’s Approach to SEO: The Only 3 Things You Should do Every Week To Get Traffic
How to Amp up Your Videos and Podcasts with New Beats
The Growth Machine Behind Canva’s $6 Billion Business